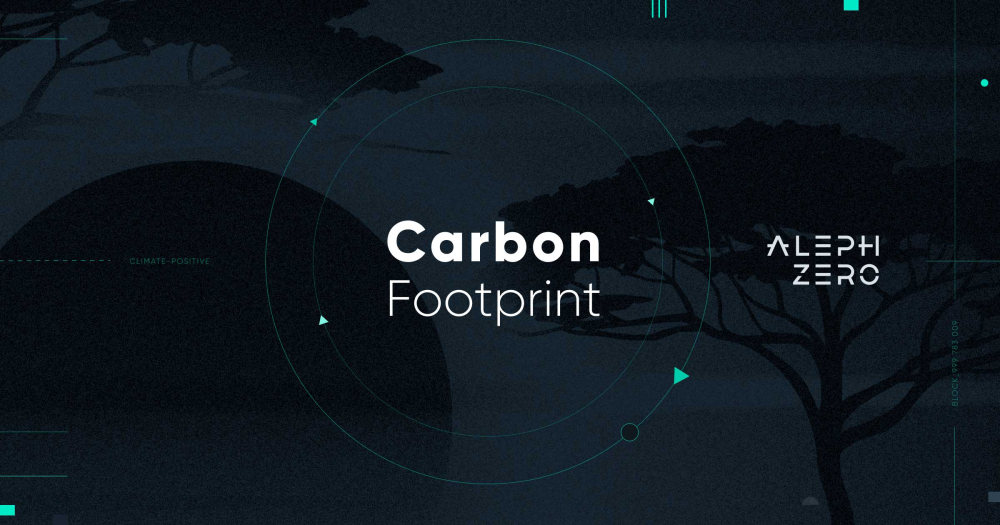 Despite current setbacks for speculative circles, excitement for blockchain’s potential has never been higher among both individual users and enterprise adopters. This newfound attention brings new scrutiny as well. When it comes to long-term business priorities and challenges, energy consumption sits right at the top of the list.

Carbon footprint is clearly a divisive issue within the blockchain industry. However, the road forward is clear enough: we’re sitting at a pivotal moment where we have a choice to actively champion new standards for reducing the industry’s environmental footprint.

Aleph Zero has always treated environmental sustainability goals as an essential component of long-term success rather than an optional feature to be built out later. That’s why we’re part of the Crypto Climate Accord and have built an efficient technology that pushes forward its objectives.

We started off with designing and developing our high-throughput, bespoke consensus protocol. We’ve then moved to utilize the Substrate stack via the Substrate Builder’s Program, which allowed us to benefit from the work that has already been done by others. Combining this approach with our own DAG solution allowed us to create a high-performance blockchain that minimizes energy consumption simply because of its design.

That’s not enough, though.

Also worth considering is that whenever you use an electronic device, it is being run by a complex mechanism that consists of not only chips and processors but also a coding language that makes it run and perform its required function.

Unsurprising, although not exactly intuitive, is the revelation that the coding languages we employ when building applications and electronic devices impact energy expenditure. How does this impact Aleph Zero? Studies in this field were conducted in 2017 by a team of Portuguese researchers that found that Rust is the second most eco-friendly language in use. These results contribute an additional layer to Aleph Zero’s positive ecological footprint, as Rust is our go-to programming language and is responsible for powering everything being built on the Aleph Zero blockchain.

In an effort to become not only carbon neutral but carbon-negative and climate-positive, we’ve decided to extend our efforts by purchasing carbon offsets for the first half of 2022. The Aleph Zero Foundation is a participant in Native’s Northern Kenya Rangelands project with an initial purchase of 14 tonnes in carbon offsets and plans to continue its involvement in other projects throughout the year.

Native is leading an effort in soil improvement over 1.9 million hectares of savannah grassland that results in additional carbon storage. Besides being ambitious in addressing climate change, the project supports local communities and biodiversity conservation by helping combat drought and protect endemic endangered species.

As a Public Benefit Corporation that has been around for over 20 years, Native is a certified B-Corp working with the likes of Stripe, Lush, Everlane, LimeBike, and others.

In further stages, we will also expand our offsetting efforts to include the footprint of the broader project and its core partners, such as Cardinal Cryptography, including the individual carbon footprints of all core team members in their work-related activities.

Eco-friendly blockchains are live and being used today, and we aim to present Aleph Zero as a prime example of the industry’s commitment to addressing sustainability issues. By leveraging a Proof-of-Stake with the added efficiency of a novel approach to DAG, we’ve achieved a drastic reduction in energy consumption without sacrificing the security guarantees and decentralized nature the future economy will be built on. This reduction also makes it feasible for the network’s foundation to compensate for our energy consumption in its entirety.

However, we are aware that offsetting the carbon footprint through the use of carbon credits is only part of the solution and should not be seen as the end-all of our ecologically minded initiatives. We are planning further actions that will minimize the impact of our technology stack on the environment to ensure a greener future both for ourselves and the generations that come after us. The list of action points we’ll be handling in the near future includes neutralizing the carbon footprint of not only the nodes connected to the network but also the carbon footprints of the core team’s activities. The ultimate goal for Aleph Zero is to become entirely carbon-positive. 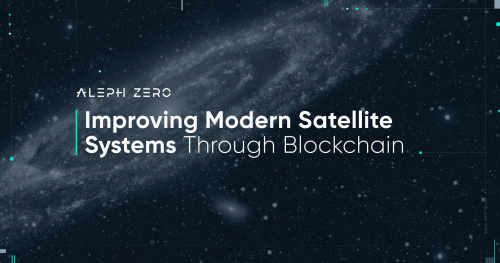 The intersection of blockchain and space exploration is a world of hypotheticals that demands we perceive the benefits of this partnership occurring years from now. Fortunately, a more tangible set of goals is within reach as we explore the connection between satellite systems and blockchain.  Before humanity heads into deep space and begins enacting the 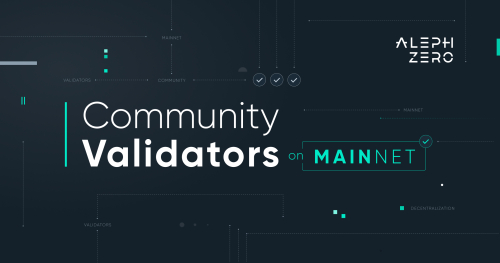 Come early December 2022, the Aleph Zero development team will introduce an update that will open the Mainnet to community validators—a significant step forward in decentralizing the Aleph Zero network.  The key concepts that Aleph Zero’s blockchain aspires to represent are decentralization, security, privacy, and scalability. It is with great pride that we announce that 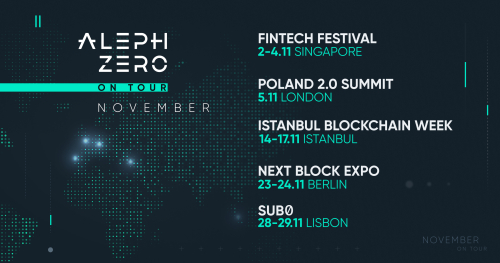 The last quarter of the year is getting off to a dynamic start with the Aleph Zero team attending a series of conferences that span from Lisbon to Singapore. Let’s take a look at where we are heading and what to expect!  FinTech Festival, Singapore 2-4.11  Aleph Zero has been selected as the winner of